The Ed Duren Memorial Young Producer Award recognizes ranchers/farmers/food producers, 35 years of age or younger, who are directly engaged in production agriculture for their commitment, innovation and leadership/service benefitting the Agricultural industry. With the average age of Idaho farmers upward of 57, these award recipients represent the exciting – and critical – future of agriculture in Eastern Idaho. 2020 was the first year a class of award winners was recognized by the EIAHF.

Launched in 2018, this award is presented in memory of Edward Paul Duren, a man whose positive impact on agriculture in Eastern Idaho is beyond measure. A University of Idaho Extension Livestock Specialist based in Soda Springs, Idaho, Ed spent a 39-year career (and many more years as a professor emeritus) providing education, outreach and leadership to producers and organizations across Idaho and beyond.

Ed was nationally and internationally respected as a trailblazer, author and educator, and was a tireless advocate for the involvement of youth in agriculture and agricultural experiences. He pioneered a holistic ranch business model he titled “integrated resource management,” and was instrumental in linking university faculty and allied industry with Idaho farmers and ranchers for applied on-farm research and demonstrations responding to locally-identified needs.

Ed had a lifelong passion for family, agriculture, education and draft horses. 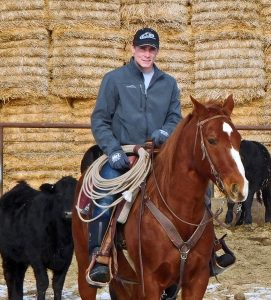 Twenty-six-year-old Kenny Dalling got his first Ag loan at age 14, and has never wavered from his chosen path as a farmer and stockman.

He is a man who is building a successful and diverse agricultural operation in Fremont and Clark Counties by recognizing and capitalizing on potential, while being mindful of risks and cash flow.

Kenny started with a unique business model: he and his wife, Abby, purchase or rent neglected parcels needing major work and as a result, are more affordable and available than developed farms.  Usually their condition, location and odd or small sizes have made these places unappealing to other producers.

By hauling off junk, weed control, and irrigation development, he brings these lands back to life and into crop or pasture production.

Kenny owns 100 acres, leases another 550 acres from eight different owners, and manages his parents’ farm of 1,000 acres.  He buys and restores his mostly elderly farm equipment, and has grown his beef cowherd to 60 head.  He custom bales hundreds of acres of straw, and is rapidly expanding his hay markets.

Kenny’s work ethic and accomplishments are amazing, but he’s a quiet guy who leads by example.  He’s independent, self-sufficient, and determined to raise his growing family on the land.

Kenny is a grandson of EIAHF inductee Glenn Dalling.

Kenny and Abby Dalling have one daughter, Kate. 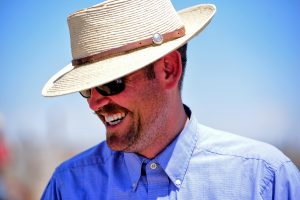 Rob Cope is a 34-year-old, fifth-generation farmer from the Monteview area.

He got his start by purchasing 160 acres, which featured most of Idaho’s noxious weeds, damaged sprinklers and exhausted soil.  It was a much better farm when he sold it.

Rob and his wife, Candace, now own 480 acres where he raises alfalfa, barley, wheat and pasture, plus cattle and horses.  He also helps his dad with the family’s farm and grazing ground.

Rob is constantly educating himself about crop and livestock production and agri-business management – pushing himself to improve, increase, conserve and restore.  He has the well-deserved reputation of leaving his land – and the people around him – better for having known him.

Producers of all ages watch Rob closely as he tests and adopts innovative practices relating to precision agriculture, rotation crops, and soil and water conservation.  Other growers often quiz him when he stops in at Ike’s or Mud Lake Farm Supply, and he willingly shares his ideas.

Rob is also active in the tiny rural community of Monteview: a West Jefferson Lion’s Club member, and a 16-year volunteer fire fighter.  He coaches kid’s sports, and has been elected by water users to two canal boards.

Rob and Candace Cope have two children, McCrae and Charlee. 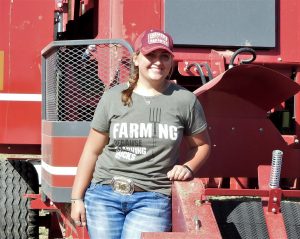 Few 19-20-year-old women post pictures of haystacks and tractors on their social media pages – or operate their own agribusiness.  Saydee Longhurst does, and is proud to say she’s a member of a first-generation farm family.

Saydee is a commercial hay producer, businesswoman, mentor and inspiration for women and young people interested in our industry.

She started her small-bale alfalfa and grass hay venture at age 14 as an FFA project, but soon saw real business potential.  She has increased her rented acreage and financial investment every year to cover operating costs, customer demand, and now her college expenses.  She raises alfalfa and alfalfa/grass hay and markets under her “Cleo’s Cuttings” business name.  To expedite loading, hauling and stacking, she partnered on one of the first small-bale aggregators introduced to eastern Idaho, which compresses and string-ties 18-bale bundles.

Saydee is a former Idaho State FFA president, serves on the Idaho FFA Board of Directors, and helped conduct the inaugural Gem State Leadership Conference.

She has traveled extensively as an ambassador for agriculture and Idaho, participating on a panel with US Secretary of Agriculture, Sonny Perdue, and interacting with many national industry leaders.  She’s a member of several hay, cattle and women’s agricultural organizations, and regularly attends industry meetings and producer workshops to learn and network including several trips to national FarmHer conventions.

Saydee is balancing her hay business with attending Utah State University, where she is majoring in Ag Education with emphasis on agronomy and entrepreneurship. 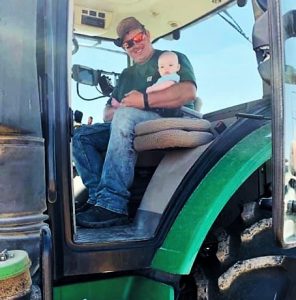 When 35-year-old Sedar Beckman and his wife, Danna, purchased the original 155-acre Beckman family homestead in New Sweden, he reaffirmed a passion and commitment to Agriculture that goes back generations.

As well as responsibilities as manager and co-owner of Beckman Livestock & Farming south of Roberts, Idaho, Sedar and his wife independently own and/or lease farm and grazing land, and are increasing the numbers and national market share of their purebred LimFlex cow herd.

It’s early when he goes out the back door every morning – but he’s already been busy updating crop, farm and cattle records, and researching strategies to better manage his land and livestock resources.

Sedar is a producer with a strong sense of giving back to the industry.  He serves on the board of the Bonneville County USDA-Farm Service Agency, the Idaho Grain Producers Association, and is active in several other local, state and national farm and livestock organizations.

Sedar has helped many kids select, train and show their steer and heifer projects – at the same time teaching them about proper care of their animals.  His tips are based on his own success with Idaho-bred Beckman cattle at the nation’s premier livestock events.

When a neighbor is in need, Sedar will be among those mobilizing help – often the first there with a shovel, pitchfork or combine.

Sedar is the grandson of EIAHF inductee Bonnie Stoddard, who nominated him for the award.

Sedar and Danna Beckman have one daughter, Winston.